RP • While these stories must take place within the setting of the Harry Potter books, they may contain alternate plot lines or endings that occur in the books.
Forum rules:
You are posting in a Freeform Sandbox Forum!
Freeform Sandbox Overview • Sandbox Plotting • Posting Templates
For additional BBCode templates, click here. 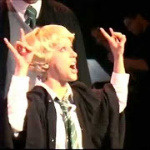 Draco Malfoy • Wizard • Teens?
"I'm tired. Can't we just be Death Eaters?"
Draco could hardly believe that all of his peers though that Pigfarts was something he was making up. Just because the Headmaster, Rumbleroar, sounded a lot like the Hogwarts Headmaster, Dumbledore, didn't make it fake. Neither did the magical school being on Mars. Wizards could totally breathe on Mars, that was a fact. They were really going to regret making fun of him for bringing up Pigfarts.

He thought about all of the amazing lessons he was going to have while at the other, better school, as he colored inside the lines on his drawing. He could already see it, taking rides on Rumbleroar's back, playing hide and seek among the Martian rocks. He was smiling to himself when he started to hear a voice coming toward him in the hall and he looked up to see who it was.
credit
VKP
Write with me!!

"You can't wear that here," Hermione gestured toward Draco's outfit, crossing her arms over her chest. She was loving Hogwarts so far, and loving all of the rules, even if some of her fellow students didn't love the rules quite so much.

"I know that you think there's some other school you should be at, but we have a dress code, you know. I should tell a prefect. Or your head of house."

He stood up. "What do you mean I can't wear this here? What are you even talking about?" he questioned, almost annoyed at how perfect Hermione Granger was.
credit
VKP
Write with me!!

"I know you know what a dress code is," Hermione huffed, raising her eyebrows at the strange boy.

"You're supposed to have on your house robes. Not some..." she waved her hands around to illustrate a point. "Well, that. You're going to have to go change if you want to keep going to class, or you're going to lose your house all of their points. You do know about house points, don't you?"

Draco stared at Hermione, with his mouth slightly open. "You realize that I am Draco Malfoy, right? I can get away with anything I want here, and I'll still get my scholarship to Pigfarts. Just because you need to be all proper and fancy and gorgeous doesn't mean everyone needs to be," he rambled, rolling up his drawing. She didn't deserve to see it right now.

"Besides. I was on my way to change in to them anyway. Not all of us are as perfect as you."

credit
VKP
Write with me!!

'So is Hermione Granger or Winky the house elf the ugliest girl in school?' He asked Crabbe.

Draco paused rolling up his drawing and stared unseeingly at it. Had he called Hermione 'gorgeous' to her face? Well, crap.

"Grotesque- I said gorgeous. I mean grotesque!" he tried to correct before latching onto Goyle's question and turning around to interrupt. "Hermione is obviously the ugliest girl in school. But it's not like I have to rate her on a scale of one to ten where one is the ugliest and then ten is pretty, I would give her an eight. Maybe an eight-point-five. But not over a nine-point-eight. And I'm holding out for a ten. Because I'm worth it."

credit
VKP
Write with me!!

'He is,' he informed Crabbe.

For a brief moment, Hermione felt a flutter in her chest.

So many people didn't like her here, or had awful things to say. And here someone, even someone she hated, was calling her gorgeous?

Except he wasn't. Or at least, that's what he was claiming now.

"Whatever," Hermione huffed, trying to brush it off as she began to walk away. "At least I'm not failing charms."

It wasn't even a good insult. As far as she knew, Draco was doing great in charms.

Crabbe and Goyle, on the other hand... well, the look she gave them as she began to move away spoke volumes.

Yeah, he felt better after that.
VKP
Write with me!!

'Am I failing Charms?' He asked his friend. Crabbe shrugged.